Five Parsecs from Home, Turn 2.  Escort Mission against four bounty hunters, three with shotguns and one with a hunting rifle.

What looks like a simple job is about to get complicated.  Unbeknownst to our crew, the VIPs mission has been deliberately leaked to try and identify a security breach in the patron's organisation. 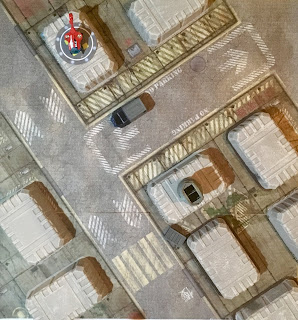 The encounter area, The VIP needs to get from bottom right to the VTOL at top left.
Opposition will come in form left and right 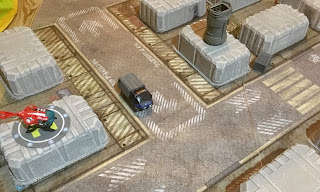 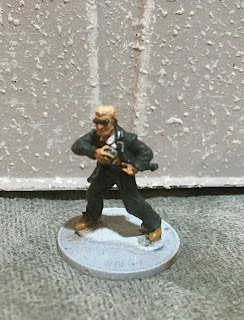 “Jak this is Reece, VIP’s  all done here, we’re on our way back to you now.  All clear for pick up?”

“Receiving you.  This end is all cle… Shit! Correction.  We have armed hostiles coming from north and south, looking to cut you off!  Proceed with caution, we’re engaging…” 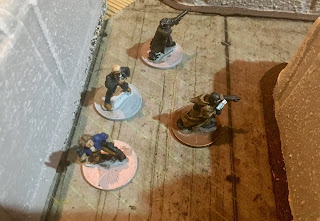 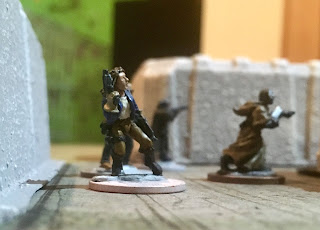 The escort team receive the news

“Crap . Job’s gone south already!” Reece exclaimed.  Nat instinctively took point, covering the alleyway to their left as Reece and Anul closed in around their charge.  From ahead came the distinctive ‘burp’ of Jak’s Shell Gun, followed by the thump of a shotgun being fired.  “Well that wasn’t one of ours” said Reece, “let’s get moving!” 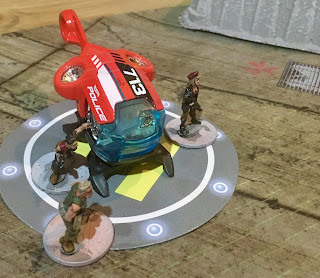 “Kari, two hostiles to our left!” Jak shouted, crouching by the VTOL and unlimbering the heavy shell gun.  He peered down the length of the stubby barrel, adjusted slightly, and let the explosive round fly at the two bounty hunters coming down the road at them.  One dropped like a rag doll, thrown aside by the blast.  The other staggered but didn’t fall, discharging his shotgun in return.  Out of the corner of his eye he saw Kari drop to the ground.  Not good… 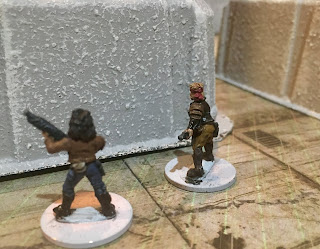 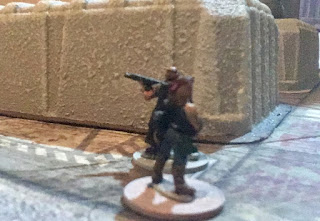 Hostiles move in as two teams 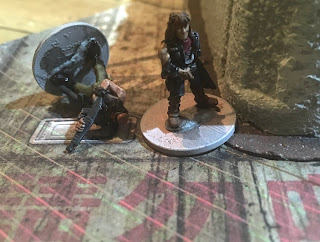 One down!  victim to Jak's Shell gun

“Two more to the south!”Mila yelled, sprinting past Jak to take cover behind a truck, closing the range to the new targets coming out of an alley.  Jak let the shell gun drop and unlimbered his auto rifle.  Mila and the others would need to keep the new guys busy.  He needed to deal with the first hunters for now.  Aiming carefully, he let off a controlled burst and watched with satisfaction as his target dropped like puppet with its strings cut. 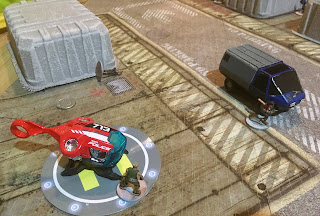 Kari's down, but another bounty hunter follows

Spurred on by Mila’s warning over his comms, Nat sprinted down the alleyway.  There, just behind the armoured truck, a figure with what looked to be a shotgun.  Pointed right at him!  Nat had time for one wild shot before he slammed into the side of a shipping container.  The shotgun’s blast hitting the other side at near point blank range rang it like bell.  Taking a deep breath, Nat slung his rifle and pulled a short, heavy blade from under his trenchcoat... 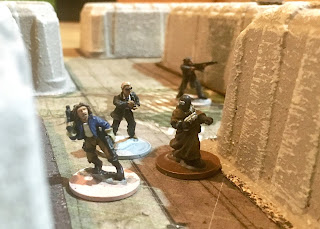 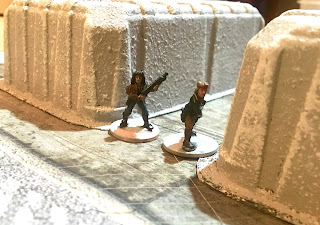 Another threat comes in from the south 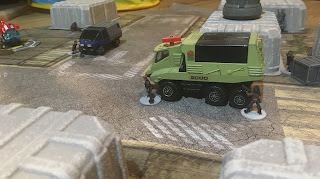 Jak and Mila to the left, with Nat coming down the alley to the right

The shotgun blast made Jak rock back on his heels, feeling like he been kicked by a mule, but his sturdy flak jacket prevented anything worse.  Regaining his balance, he brought the auto rifle back up to his shoulder to return fire towards the bounty hunter hiding behind the armoured truck, only to find his target wasn’t there anymore.  Instead he heard shouting, followed by a brief, sharp yell. “what the hells?” he muttered. 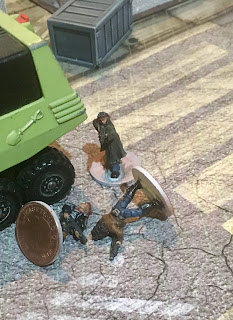 Nat disposes of the two remaining hunters in quick succession 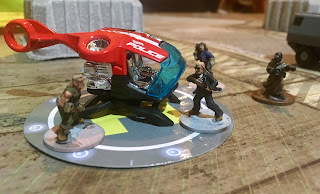 Reece watched as the VP got into the VTOL and triggered its return protocol.  Mila gave him a thumbs up from where she was knelt next to Kari.  A still somewhat shaken Nat walked up to him and offered him a flask he’d produced from somewhere in his trademark long coat, “Well, I guess that could have gone worse”.  He took another swig from the flask, “How much are we getting paid again?”.

Another really quick game ,lasting only three turns in total!  Kari turned out to only be knocked out, again (this is becoming a habit).

The crew made no new enemies this turn, and got paid seven credits (a D6 roll of five, +1 for a parton job and a further +1 for it being a 'wealthy benefactor').  Feeling bad about the deception, they also threw in an Alien Artefact, some 'upgrade goop' for one of the weapons.  I also rolled a campaign event; Nathaniel was offered an opportunity too good to be missed, resulting in gaining and enhancement implant (offers additional XP) and some alien artefacts to trade.

Next turn looks like it will include battle-droids.  What fun!