I've been playing a bit of Aeronautica Imperialis lately, the air combat game set in the Warhammer 40,000 universe, from Forge World. Incredibly simple rules to pick up, but their simplicity doesn't limit games at all.

There's even a campaign system included (always a plus for a set of rules in my book) which a mate (Matt) and I have been having a go at. Matt's been keeping track of the campaign on his club's website 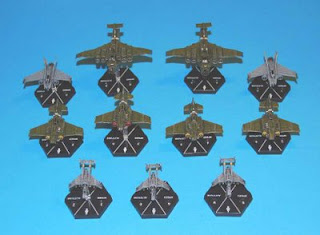