Ride of the Valkyries Part I

Here's the first of my Valkyries painted up, next to the unpainted one for comparison. The inspiration for the camo scheme came from pictures of Soviet Mi24 Hinds and fits with the desert theme of the campaign I've been playing. It doesn't strictly fit with the colouring of most of my other planes, which are more WWII Army Air Corp, but I figure:

(a) I've already wandered from that theme with my Lightnings;
(b) These are likely seconded from a separate squadron, so wouldn't necessarily be in the same colours;
(c) As these guys have to spend their time flying 'low and slow' in hostile environments, they're going to be quite keen on blending in and probably repaint for every new environment. 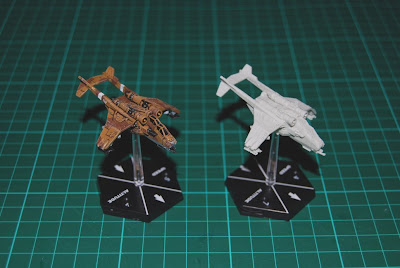 The challenge now is to try and do the other one by the weekend, so that's two nights then...
Posted by Alan M at 14:20