I wanted a base that was a bit different from my usual 'grassy' look. In my mind I had an image of a battle across a marshy wasteland. It also meant I could sink the horse's hooves into the ground a little to make it a bit more stable.

I started by undercoating the base black and, after a few tries, marking where the horse's hooves would need to go and where I wanted marshy pools, which were covered with thin plastic to provide a smooth surface for painting.

The ground was built up using fine milliput, leaving the plasticard uncovered for pools. A textured surface was added by stippling with sandpaper. Detail was added using bits from other models (the arrows), cork chips, garden twigs and old brush heads. Finally, the model's hooves were pushed into the putty to make hoof prints. 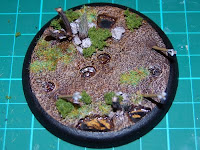