Back online with some Red Devils

Right, new laptop purchased, backup restored as best I can, point me at the web!  Probably a few posts to come as I catch up with myself, I'll also be catching up on my reading and commenting on the great work my fellow bloggers have been getting up to during my time in Limbo.

First up, some test models for British Paras.  This initial four are from the Italeri Anti Tank Teams set and are really nicely sculpted, if at the larger end of 1/72.  For the Brit paras, the Denison smock is the iconic bit of kit, so I wanted to make sure that I could paint it successfully before embarking on any more, hence starting with these four as a test.  If successful, I have another set of Italeri paratroopers waiting in the wings (I'd love to add the Esci 'Red Devils' set to this list, but they seem to be as rare as hen's teeth). 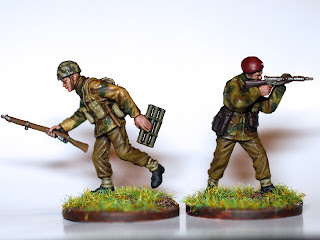 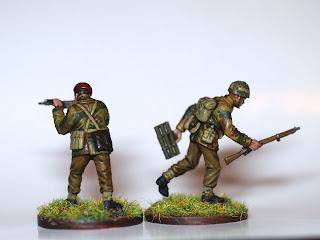 I've tried out two variations on the camo, which you can see above.  On the left I started with a GW Foundation Paint Gretchin Green basecoat for the smock, the right started out as yellow ochre.  From what I understand, the early denison smock was quite yellow, but became a more olive colour later.  From that point of view I think the left hand version is more appropriate for Normandy onwards, but I'd be interested to hear what others think.  I'm quite please with how the brown and green patterns have turned out, it helps that the smock pattern was originally just brush strokes of thin paint! 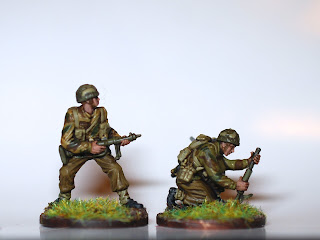 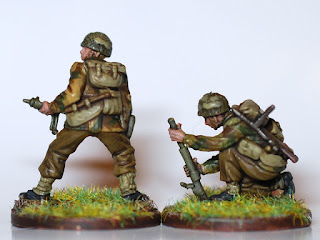 A couple more, this time the PIAT operator is in the yellow ochre base version, with the 'late war' pattern on the chap with the rather nicely done 2" mortar.