Back in the Air!

My mate and occasional gaming opponent Matt recently returned back to the UK after a few years teaching English in Japan (welcome back, sorry we appear to have broken the country in your absence!).

We managed a meet up a couple of weeks back to catch up, chew the fat and generally see how the world was treating us.  We also managed to get a quick game of Aeronautica Imperialis in, on the basis that it's fast, there's not much to pack, and it's simple so we could both relearn the rules quickly as its been a while!

As we haven't played for a bit we went with a straight combat air patrol, with two side of equal points facing off.  I took my usual 4 'vanilla' Thunderbolts and two Lightning Interceptors.  Matt took what looked like a swarm of Barracudas, plus a Tigershark Drone control aircraft and two drones, for a bit of variety.  He deployed his entire force together more or less in the centre of is table edge, while I deployed my four Thunderbolts together on my far right flank and the lightnings facing his aircraft,travelling at full speed for a quick slashing attack.

Matt's squadron split as it advanced, with the barracudas taking on the Thunderbolts and the Tigershark, Drones and a covering barracuda taking on the Lightnings.  The Lightning's sped towards the tau and then past, damaging the Tigershark in the way, before looping around for another pass.  Meanwhile the Thunderbolts kept formation and blew one of the Barracudas out of sky with concentrating bolter and lascannon fire, before taking hits from the Barracudas as the two formations mixed. 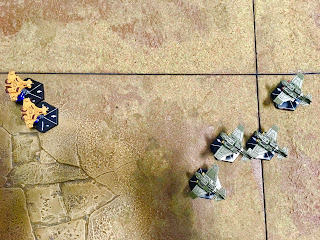 "Come into the cone of death little fish!"

The Tigershark found itself caught between a tailing Lightning and oncoming Thunderbolts and bit the dust, reducing the effectiveness of the drones, whilst I lost a Thunderbolt (or two) in a dogfight with the other Tau (including one shamelessly gunned down as it tried to retire damaged and low on ammo, typical aliens!). 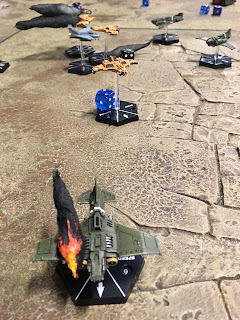 "He's on my six, can't shake him!"
A Thunderbolt is about to finish off the Tigershark in the background

In the end the honours were about even in terms of aircraft lost and damaged, although Matt pulled out some of his aircraft off the table out of ammo.  With the victory conditions for the scenario including points for surviving aircraft without ammo getting off the table, this made Matt the technical winner, but I like to think that as I was left in charge of the sky with fuel and ammo to spare I was the real winner ;-)