Nat and Noah both spent time training, gaining +1 XP each, which was enough for Nat to level his Combat Skill up to 2.

Reece and Anul went trading.  Reece used his ‘Trading’ skill to re-roll one result, resulting in gaining 2 credits in local currency and more trade goods.  They also traded in one lot of alien relics for another roll on the trade table, gaining a repair kit (could have done with that at the end of last turn…)

Kari continued to try and track down the raiders, but with no luck (despite her new skill bonus).

Jak and Mila went exploring.  Jak had a nice time, seeing the sites, a change from training.  Mila, however, had a different purpose in mind.  In the aftermath of the raid on the cult compound, she’d noted a familiar looking symbol on papers scattered around the compound, and sought out an information broker to answer some questions...

Mila found Reece with Kari, checking over the ship's growing armoury. "I know this might be difficult, but I need some help from you all...".  Mila then laid it all out for Reece.  How, when she was still part of the Church of New Horizons, she'd had a sister; and the day that sister had been dragged away by the church's inner circle, while the rest of the congregation, including their own parents, did nothing.  And about the symbol her hooded abductors had worn, one that she had never seen again until that raid on the cult compound.  After the raid she had gone looking for more information, only to discover that the same group had been hiring equipment and workers for an archaeological dig site outside the city limits, and the name on the paperwork was a known fixer for the church.  Reece thought for a moment or two before speaking, "Well.  I guess we'd better round up the crew then."

The background to this mission came from Mila rolling an encounter with an Information Broker when she was Exploring, and then rolling up my first 'Quest' result for the turn's encounter, and it all seemed to fit.

The mission rolled up was a 'capture' mission, which would take place at an archaeological dig site against a group of Zealots. 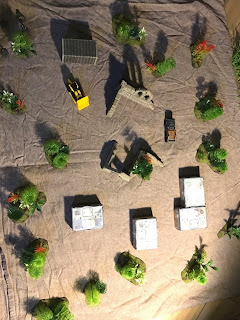 Reece took the viewer off Jak and took another look at the encampment in the valley bottom, a collection of prefab huts and equipment around the remains of some old stone structure, local workers were loading up into trucks as the evening set in.  "So what have we got?" he asked Nat.

"I tracked down where most the the workers drink after their shift" said Nat, "Local rumour is that the first settlers landed here and built some kind of church on the site.  No one knows what they're digging for, just that that's one guy in overall charge and a handful of armed guards, religious nutjob types".  He glanced at Mila and Noah "no offence intended", Mila just flashed back an almost feral grin. "The locals all shut up shop at the same time and are driven back to town every evening.  Everyone else stays on site".

"Okay.  We wait until the last truck is well away then we go in.  Remember, we want this guy alive".

The first turn was quiet, with the crew simply moving up.  Reec, Jak, Mila and Kari moved to the shelter of the earthmover ('borrowed' from the little miniature's sandpit!) while Anul, Nat and Noah moved wider to get around the flank of the encampment. 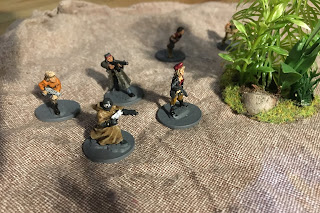 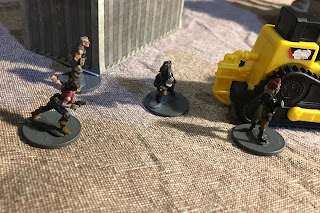 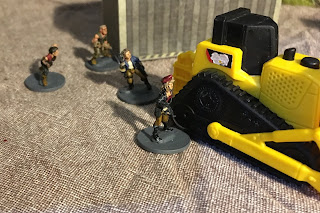 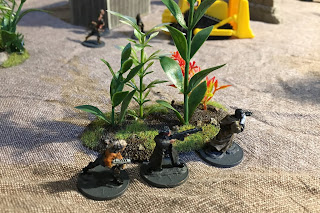 Turn two saw the crew roll 3 quick actions - Kari took overwatch by the digger while Jak and Mila moved up.  Then the faecal matter hit the big rotary thing...

"Uh, Reece?" shouted Kari, "lot of angry red bedsheets heading our way!", as a hoard of robed figures emerged from the huts and ran towards them.  Kari raised her autorifle "like they knew we were here..." 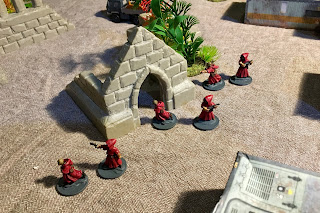 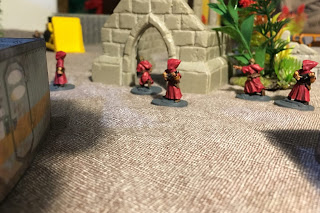 Kari, on overwatch, was first to fire - immediately dropping the nearest zealot.  Reese took cover behind the digger's blade, drew his pistol and fired.  Another robed figure fell to the ground (Reece actually did something useful in combat, finally!!!).  Nat took another shot but missed, dodging the return fire from his target. 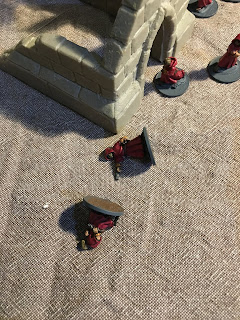 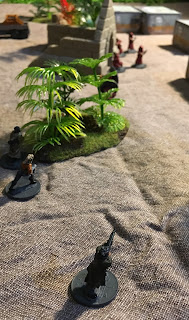 The crew failed to roll any quick actions for turn three but luckily none of the zealots were quite able to reach anyone despite running at full speed (enemies with the 'Psycho' rule will always try to close to brawl with the enemy). First blood to the crew of the envoy

Kari steadied her aim and dropped another target, and Anul blasted another zealot who was almost on top of him (the Zealots have higher toughness than normal, so this wouldn't have been a kill without Anul's blast pistol causing +1 damage).  Reece, Noah and Nat all missed shots - and Reece then took a wound from his target's return fire (reducing him to 2 hit points). 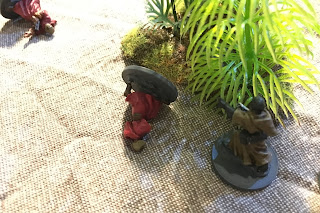 Jak stepped up in his new combat armour, drew out the suppression mawl and promptly clubbed another zealot to the floor in a brawl. Mila steadied her aim (+1 to hit), and put down the last zealot with a single shot (the crew's dice rolling for damage in this game was pretty hot). 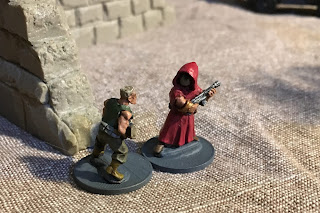 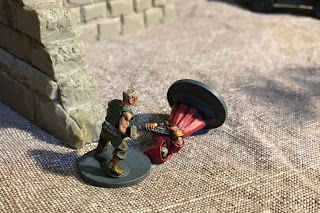 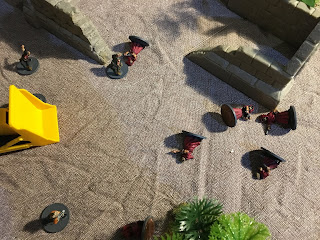 Where'd they all go?

The crew rolled two quick actions and Kari and Anul repositioned closer to the camp.

Unnerved by the sudden loss of his bodyguards, the church leader made a break for the last remaining truck on the site. 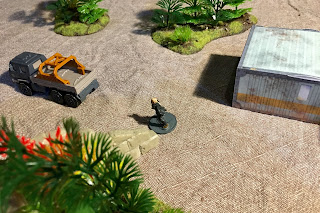 "Gotta get out of here!" 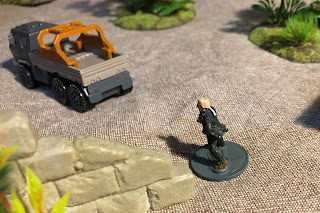 The rest of the crew moved to try and cut him off, but it was looked like it might be close.  Or at least it did until they rolled up four quick actions for turn five...

Reece remembered his jump belt and leaped behind the target, unloading a full clip into the ground around him (using the suppression rule from the compendium), Kari did the same from the flank. 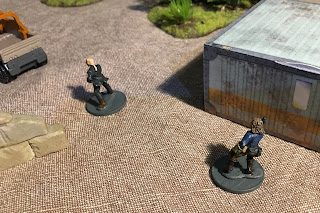 With two stuns in place, Jak strolled up, tapped him firmly on the head with the suppression maul and slung him over his shoulder. 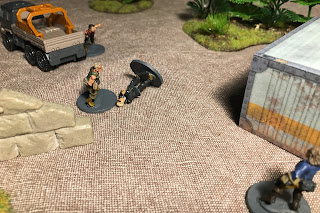 The crew gained four credits and two rolls on the gear table in loot, resulting in one frakk grenade and a nano-doc.

The Campaign event saw the crew meet a shady character who traded a grenade for a credit (won't ask what they plan to do with it, I'll put than one down to Kari).  Anul received a coded message and told the crew he would have to leave temporarily but wouldn't explain why (character event, he'll be back in two turns.