The chalk lines through the names of pilots and aircraft in the Imperial Situation Room told its own story to Commander Hood. There was little doubt about it, despite their own losses, the Tau were winning. With only three fighters and three bombers left, there just weren't enough aircraft to maintain the offensive without further replacements. 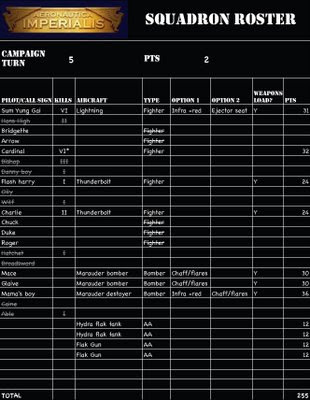 Fleet command however were able to offer a glimmer of hope. Analysis of the Tau fleet patrols had shown a pattern developing and a predicted 12 hour window to deliver replacement aircraft and aircrews.


- It's time to take stock again. What have I learnt:

- Even when fielding 75% of the points, the Tau can normally outnumber me with fighters
- I'm not good with escort missions, I need to make better use of formation flying
- My moves are getting predictable, Matt was able to predict my moves with worrying accuracy in the last two games
- I've underrated the Imperial Lightnings, their high maneuverability is a real bonus, plus they're cheaper than a Thunderbolt
- Achieving the objective is nothing if you lose too much doing it!
- That I definitely enjoy playing campaigns!

So, how do I spend my 100pts of reinforcements? I still have two standard Marauders and a Destroyer, so I should be OK for at least one more bombing mission. I have no more landers, so troop insertion missions are out (but my record on those is not good!). Fighters are the big need. I could replace my Thunderbolts, which can do both Ground Attack (but I also have that destroyer) and Air to Air, or should I go for more Lightnings? That would need new models though. Decisions. decisions...
Posted by Alan M at 04:43