Imperial aerial reconnaissance showed that the Tau had discovered and occupied one of the colonies former factory facilities. Hotspots on the sensor scans suggested that the Tau were on the verge of getting the facility active again. This was a situation that the Imperial Command simply could not allow, either strategically or politically so an immediate night-raid was ordered.

Two fully loaded Marauders, Broadsword and Hatchet, would form the core of the strike force, escorted by the two remaining Lightnings, flown by Hans High and Sum Yung Gai. The recon photos had shown the factory protected by a pair of missile platforms, so a flight of three Thunderbolts (Danny Boy, Flash Harry and Oily) would accompany the mission with a mixed armament of Skystrike and Hellstrike missiles to take on both air and ground targets.

Facing them were 8 Barracuda fighters, one of them Blacksun equipped, and two skyray defence platforms.

The imperial forces started at high altitude, the Lightnings flanking the bombers while the flight of Thunderbolts took the right flank. The Tau fighters meanwhile deployed in three flights. 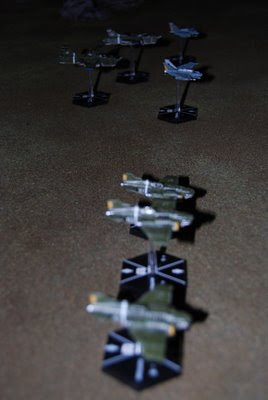 [The imperial forces deploy]
The Marauders and their escorts, with limited options to maneuver, headed straight for the target. On the right two of the Thunderbolts headed for low level to attack the ground defences, while one stayed at altitude to intercept the advancing Tau, only to find that the Tau had successfully anticipated the move.

As the speeding aircraft met and missiles and cannon shells flew, both Imperial and Tau fighters took damage. The slow moving bombers soon found themselves surrounded by the superior numbers of more maneuverable Barracudas and Broadsword took serious damage, while the bombers' gunners were unable to draw a bead on the twisting, turning alien aircraft. 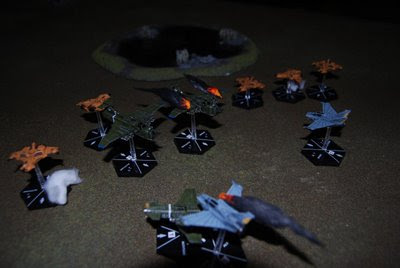 Despite this pressure both Marauders reached their targets and dropped their bombloads, completely obliterating the factory. But neither aircrew would make it back to base to celebrate, as both bombers were torn to pieces by the circling Barracudas. 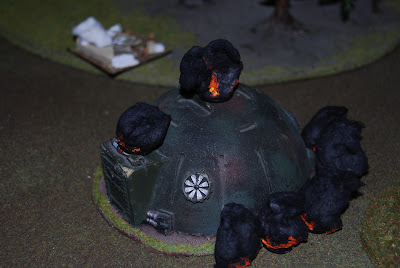 [The factory burns under the weight of 48D6 worth of attacks]

Although Oily added to the swirling smoke by taking out one of the AA platforms with Hellstrike missiles, the Tau had clearly taken firm control of the skies, downing Oily and Danny Boy (who successfully ejected) as the Imperial Forces disengaged. 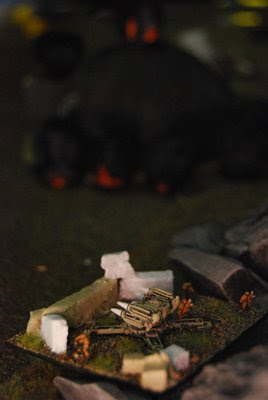 [one of Matt's excellent Tau AA platforms, the surviving one!]

On adding up the points, even though I had completed my objective by destroying (no, lets be honest, UTTERLY FLATTENING the factory), Matt had gained the victory and another Campaign point, bringing us even again. How had this happened? Quite simply, he had shot down too many of my planes, through a combination of successfully predicting my moves and coordinating his attacks. That said, the bombers weathered the attacks long enough to reach the target, and dealt out a serious world of hurt.

For my part, it was a mistake to commit so much of my force to attacking AA that caused little trouble (I could in fact have bombed from above its maximum range), which left my bombers vulnerable to the mobbing they duly received. I also coordinated my formations poorly and became predictable in my choice of maneuvers.

What this game did show was that achieving the objective is no good if the cost is too high, and this is one of the things I like about AI's campaign system.

After a break for lunch, we rolled for the next mission. With both forces taking offensive postures, seeking to deliver a killing blow, we rolled up a Troop Insertion mission, to be carried out in clear, daylight conditions. Initially the random roll had Matt's Tau down to carry out the landings but, as Matt's Orca was not yet painted and my Valkyries were, we decided to swap.

Would this turn out to be a fortuitous decision for me? Or was it to be a poisoned chalice?
Posted by Alan M at 14:04