Although the target had been successfully destroyed, the air raid had cost more valuable aircraft than the Imperials could afford but the Tau were also suffering. Both sides started to lay plans for aggressive patrols to try and force the conflict to a head.

However, before Imperial Commander Hood could launch his offensive, an urgent communique was received from the Adeptus Mechanicus mission attached to the fleet. Orbital surveillance had revealed the ruins of a large man-made structure near the planet's northern pole. The terraforming had not taken in the area, which also showed elevated radiation levels. The Tech Priests believed that the structure may hold the answer to the fate of the human colonists and insisted on inserting teams to investigate or, if necessary, deny the site to the Xenos. Although the Commander little needed the distraction, particularly with the losses he had taken, standing orders gave him no choice but to comply. Cain and Able, the task force's two Valkyrie gunships, would insert the mechanicus teams and their Drop Trooper escort, under cover of the remaining Lightnings (Hans High and Sum Yung Gai) and four Thunderbolts (call signs Danny Boy, Cardinal, Wilf and Charlie).

As the Imperial forces drew near the target their worst fears were confirmed, the Tau had got their first and clearly understood the importance of the site, establishing a defensive position covered by Barracuda fighters and even the Tau Commander himself, in his Tiger-Shark command aircraft with it's escorting Drone Fighters. 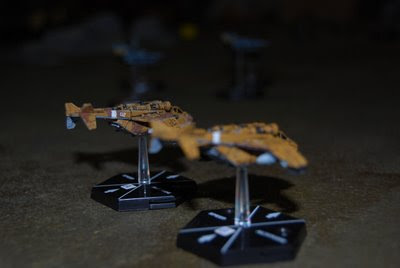 [Cain and Able Carry the Mechanicus Teams into the battle] 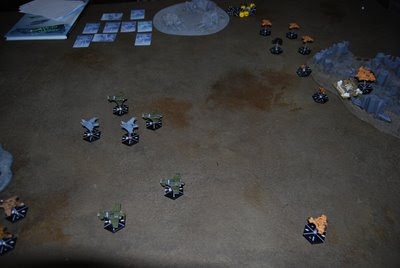 [The Imperial and Tau forces close on each other]
The human and alien fighters clashed ahead of the slow moving transports. Wilf was shot down after himself taking out a Tau Barracuda, while Charlie and Danny Boy rapidly racked up three kills against the Tau fighters between them. Cardinal had to hit the silk after his Thunderbolt took massive incoming fire, although Hans was not so lucky, plunging earthwards still at the controls of his burning Lightning. Sum, flying the second lightning, got the Imperial's first kill against one of the new Tau Drone Fighters since they were first encountered on Typha 4. However despite the Escort's best efforts the Tau were already closing on the Valkyries, damaging Able. 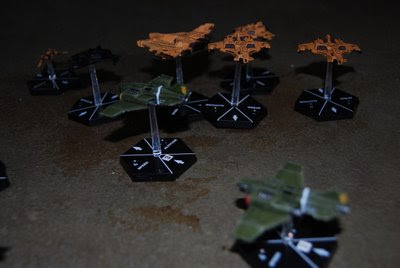 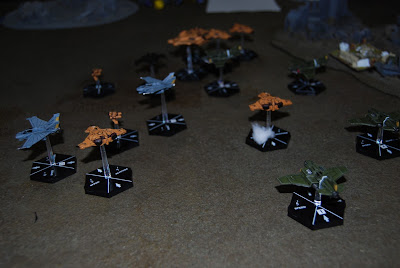 Danny Boy's victory was short lived, his Thunderbolt falling to a Barracuda. The damaged Able took out the Tau ground defences with rockets just before being downed itself, Cain being destroyed shortly after, but not before droppings its passengers within the target area.

Reduced to under half strength, the Imperial forces had no choice but to withdraw. Lacking air cover, aircraft to retrieve them, or the troops to hold the ruins against any Tau counterattack, the Remaining Mechanicus task force took the only option left to them, detonating the micro-nuke that they had brought with them in case they were unable to hold. The survivors set out back to the imperial lines on foot but, in the harsh environment, with no cover, their future looked bleak.


- Adding up the points, it was another victory to Matt's Tau, bringing the Campaign points to 4-3 in Matt's favour. Even though I had achieved my objective of landing troops on the target, once again I'd lost too many aircraft to maintain the success. Worst still, I was now down to only three fighters!

Faced with no real choice, I decided to spend one of my Campaign points on reinforcements, leaving the final score at 4-2. A lucky roll of six gave me 100 points to spend on any aircraft, but what to choose...
Posted by Alan M at 16:05