"As the weather finally cleared over Curwen, the temporary truce was ended by the ear-splitting roar of aircraft once again taking to the skies. Determined to maintain the momentum they had regained, the Imperial Forces commenced aggressive, round the clock Combat Air Patrols, testing the Tau defences.

It was on the third night of patrols that the Tau finally chose to respond, waiting until only two of Curwen's five moons was in the sky to maximise the advantage of their superiority in night fighters. In the freezing moonlit sky, Imperial flight leader Hans High vectored his Lightning and 3 accompanying Thunderbolts: Bishop, Danny Boy and Flash Harry; towards the five contacts racing towards them from the Tau lines. 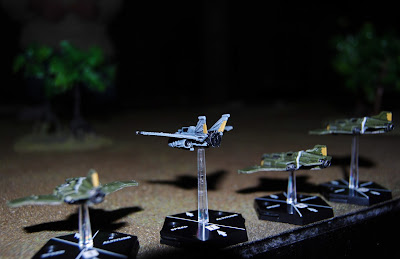 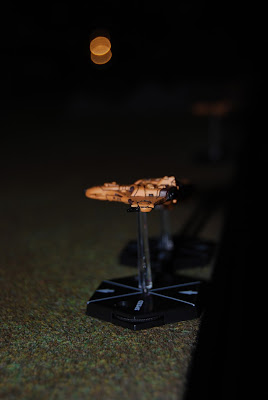 [A tau Barracuda lit by two of Curwen's moons]
Emissions suggested three of them were Blacksun Filter equipped nightfighters. With only Hans' Lightning carrying Infra Red sights, and outnumbered, the Imperial flyboys were in for the fight of their lives.

Both sides drew blood almost immediately, as Bishop downed a Blacksun equipped Barracuda at close range, only to be sent flaming to earth himself moments later. But it was Hans who would prove the victor as, in a twisting, spiraling dogfight he downed the two remaining Tau nightfighters, sending the rest scurrying for home." 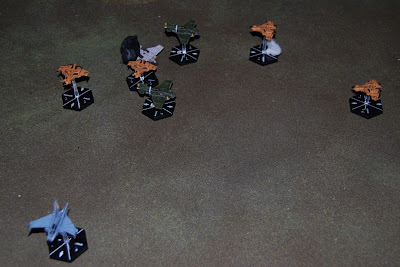 [Hans pulls wide before starting his epic dive into the dogfight]

Despite all expectations the mission had gone well for me. Outnumbered and poorly equipped for the dark conditions, Hans with his missile and infra red equipped Lightning had come through for me. With 3 Campaign points for a major victory I had temporarily pulled ahead in the campaign but, with so few fighters remaining (having lost another) I had little choice but to spend a Campaign point to contact the fleet for reinforcements. Rolling up 50 points of fighters, I added two Thunderbolts with additional weapons loads.

With the Campaign Points now level at 3-2 in my favour, we rolled for the next game. In a fit of optimism I again went on the offensive, while Matt chose to play defensively again. The result, an Air Raid by Imperial Forces against a Tau held factory. As the Tau licked their wounds Imperial Ground crews loaded Marauder Bombers with High Explosives, aircrew tested turret traverses and flight crews plotted their approach runs.
Posted by Alan M at 16:01