My mate Matt and I are about to pick up our Aeronautica Imperialis campaign, and I've got the bug to make some more scenery. Having made tank scrapes for my Hydra Flak Tanks (http://anotherslipperyslope.blogspot.com/2008/11/ai-ground-defences.html) I thought I'd do something similar for my heavy Forge World AA guns (basically Flak 88s). My original plan was for prepared, concrete bunker type defences but, after watching the D Day episode of Band of Brothers, decided to go for something a bit more of a halfway house.

I started by making a hexagonal template, slightly larger than the baseplate of the guns i'd be using. I used this to cut a suitable hole into slices of Pink Insulation foam (about 6-7mm thick, although it varied as I was using offcuts from another project), which were glued to artist's mounting card with PVA glue. The outside was shaped into a slope and the inside faced with thin balsa that had lines scored into it with a pin. 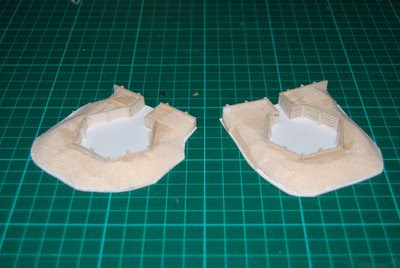 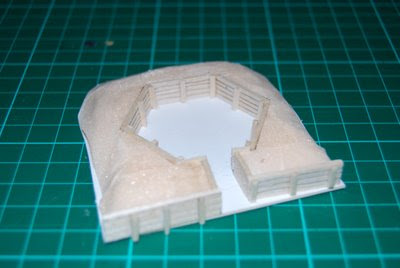 Th next step was to coat all areas except the balsa with PVA and cover it in sand. In all this stage took a couple of hours (including getting distracted by the telly). It was then left overnight to dry. Once set I started with a basecoat of burnt umber acrylic, the drybrushed up with various lighter browns and khakis (I used slightly different shades on the wood to help differentiate it) and finally glued on some static grass. 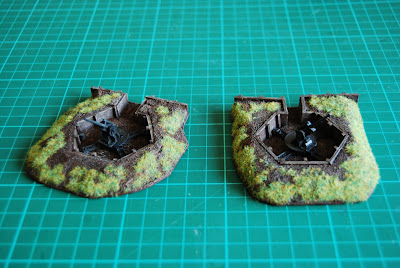 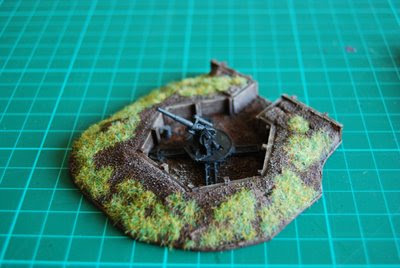 Overall I'm pretty pleased with how they've come out for very little work, so I've decided I'm going to do some connecting trench sections. As well as using these for AI and Epic, they'll also come in handy for my Great 6mm Game-in-a-Box experiment, more of which in another post sometime...
Posted by Alan M at 11:18