This last Saturday Matt and I picked up our ongoing Aeronautica Imperialis Campaign (http://anotherslipperyslope.blogspot.com/search/label/The%20Curwen%20Incident) during a day of frantic gaming at Warhammer World in Nottingham.

Just to recap, after two games Matt was ahead by one campaign point, having won the first game, an ambush, pretty convincingly (even tough I was the one doing the ambushing), although I'd pulled back some honour with a victory when he tried to intercept a bombing raid (although I'd then had to spend one of my campaign points buying two new Thunderbolt fighters).

As the new campaign turn started, my roster looked like this: 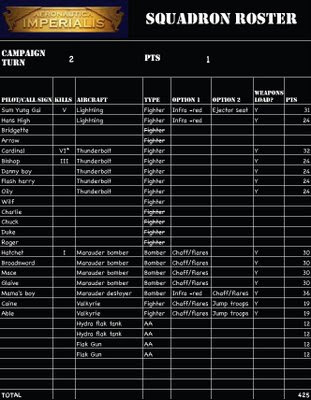 Although worried by my fighter losses I decided to take an offensive stance this turn, while Matt went defensive. The mission rolled was a Combat Air Patrol, to be carried out at night. Matt would be able to field more, and better nightfighting equipped aircraft than me, and it was a mission his Tau Barracudas have done well with in the past. This was going to be tense...
Posted by Alan M at 14:05