The Navy transports had brought Commander Hood new hope in the form of the new fighters being prepped out on the airfield. However they also brought with them a new threat. Displeased with performance so far, Central command had dispatched a senior political officer to 'inspire' the troops. Commissar General Van Voor had a reputation as a hardliner and old school commissar, given to lengthy speeches on doctrine and harsh summary justice and, in terms of tactics, an advocate of throwing men at the enemy until they run out of ammunition.

Despite the Commander's protestations that the new fighters should be used in aggressive Combat Air Patrols combined with bombing raid against key installations, Van Voor insisted that a flight be assigned to escort him in an inspection of the front line between imperial troops and the Tau. Protests from Hood and his staff that this would put him into the firing line in skies largely controlled by Tau Barracudas were met with thinly veiled threats to the Commander's competence and future career. With much reluctance, Hood had little choice but to agree, managing only to retain a small skeleton force of fighters to defend the main airfield from attack.

The Imperial force came in high, the fighters keeping close to the Commissar's Valkyrie, the plan was simple, the Thunderbolts would try to keep the Barracuda's busy, while the lightnings flew close escort, trying to clear a path. If threatened the Valkyrie was to dive into the low cloud cover for safety. As Auspex picked up the signatures of 7 Tau Barracudas on a head-on intercept, confirmed by ground observers in the Imperial lines, the pilots switched of safeties and increased power. 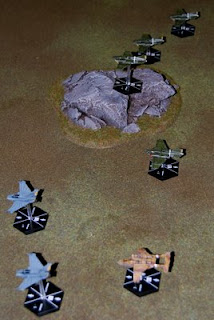 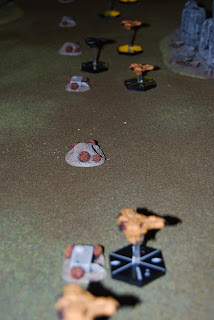 Charlie was the first to engage, his Thunderbolt engaging a Tau Barracuda at long range. Although his shots were accurate, so were the alien pilot's, the exchange leaving both aircraft damaged but still flying. As the side rapidly closed, the Imperial pilots had plenty of firing opportunities but just couldn't capitalise on them (ie: my dice rolling was appalling!), whether this was a result of poor maintenance by the overstretched groundcrews, or Van Voor's threats being screeched over the comms net was a moot point. The Tau suffered from no such similar problems though, downing first the Thunderbolts of Flash Harry and Arrow, then Chuck's lightning. None of the Imperial Pilots made it out, perhaps it was better than whatever fate the Commissar was know doubt cooking up for them.

As the fighting intensified, the Valkyrie's un-named pilot corkscrewed through the centre of the dogfight, desperately trying to avoid being brought down. Despite at one point being completely surrounded by three Tau Barracudas, the transport was only damaged and, as it broke free, even managed to damage one of its attackers, which overshot into the fire arc of the Valkyrie's lascannon. 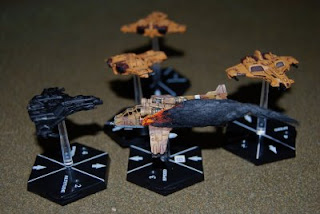 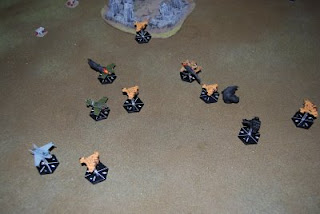 The situation at turn 5, the Valkyrie is about to show it has teeth!

As if the embarrassed at a mere transport getting a hit, the imperial fighter pilots started to hit their stride as Charlie took out one of the Barracudas. Although Sum Yung Gai took damage, both remaining Thunderbolts and the Lightning were able to break free and regroup. As they closed in on the Tau again, first one Barracuda fell to Cardinal, then another to Sum Yung Gai. But this recovery wasn't to be enough; Cardinal fell to a circling Barracuda, although he ejected safely. Reduced to less than half strength, the Imperial forces had little choice but to try and disengage. 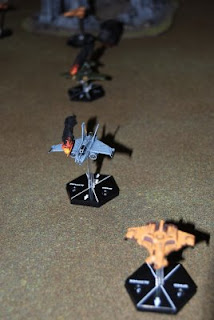 In one final twist, Commissar Van Voor finally made it to the front lines, plummeting to the ground in the burning Valkyrie which had, despite the valiant and unsung efforts of its pilot, finally succumbed to the circling barracudas.

3 points to the Tau made it, at 7 points to 2, an overall campaign victory for Matt's Tau.

With only three fighters remaining, and two of those damaged, it was clear that the game was finally up for the Imperial forces on Curwen. Facing no realistic threat, tau aircraft hammered the thin imperial defence lines. Railgun equipped Tigersharks split open bunkers like ration packs, while Barracudas strafed trenches and fire warriors and drones dropped amongst the bewildered defenders.

Of the pilots assigned to Curwen only Cardinal would survive. Picked up wounded by the last evacuation transport with a group of guardsmen, with whom he'd fought a desperate struggle to break out from the encircling Tau.

His career in tatters and future bleak, Commander Hood made the only honourable choice remaining. Taking the remaining undamaged Thunderbolt, he was last seen leading the heroic, desperate, but ultimately futile defence of the evacuation fields.
Posted by Alan M at 15:47