Here's a family photo of my recent buildings for the WWII project, particularly for Greg of 'Greg's Wargaming Blog' (check it out, he makes some fantastic scenery!) to give a scale comparison.

Left to right are a townhouse and cafe in Resin from Airfix, plastic Italieri Farmhouse, and Resin Airfix ruined workshop. As you can see, the Italieri Farmhouse is substantially larger than the airfix buildings, but next to each other they don't look out of scale, you only have to look at any street to see how buildings vary in size. As a standalone building I'd have no problem putting it on the same table with the others.
Here's a close up with a Caesar US Infantryman for scale. The style is slightly more mediterranean than Normandy, but not too out of place. The model comes in a solid (and surprisingly heavy) plastic. Assembly is pretty easy, and once constructed, with the internal floor in place, feels pretty robust. The roof isn't perfect, the pieces don't fit that precisely and the ridge tiles are a little off, but they paint up nicely. There's also a chimney, but no flat spot to place it, so it's either perch it precariously on the tiles or leave it off. But all in all a really nice gaming piece. Italieri also do a couple of other buildings in a similar style that would probably be worth investigating, particularly if you fancy gaming the Italian campaign! 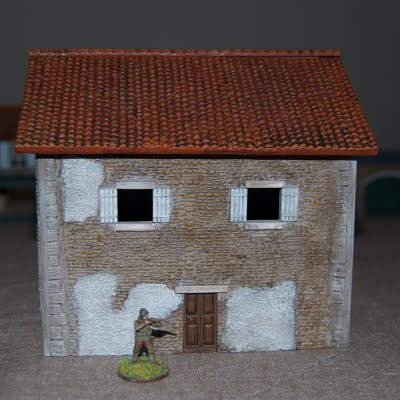 And so, on to Airfix. These buildings are cast in a nice, crisp resin. The detail is sharp and nicely moulded, in most cases with separate brass windows (they also come with clear plastic for window panes, but I figured that, as ruins, any glass would be long gone!) and they paint up really well. Again, here's our friendly GI for scale. 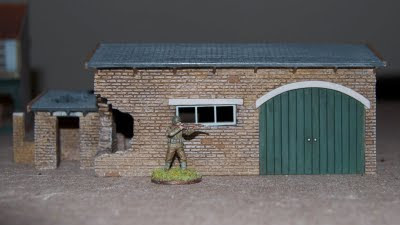 One thing that is noticeable here though is relative scale. For some odd reason, Airfix have produced these buildings in 1/76 scale (and 'small' 1/76 at that!), whereas all of their figures and vehicles are in 1/72... It's only really noticeable when you place models next to the doors so, again, not really a problem for me. Of course if your models are already at the upper end of the 1/72/20mm range, it might be too much. I wouldn't want to put them with the models from Valiant for example.
I think they would benefit from some rubble on the bases as well, which would also help disguise the low height of the doors. Another future project or me then...
One final comment though is price. They're not cheap, so you'd have to judge for yourself whether they're worth it for you. 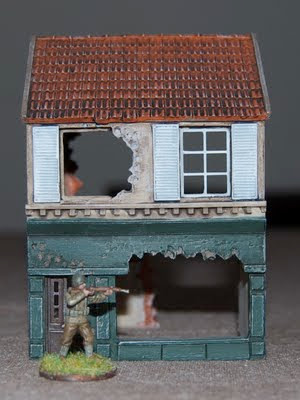