Is it wrong that I still get excited when a parcel arrives for me? Well, right or wrong I was quite cheery when I got home to find my Caesar WWII British Infantry had arrived. Even though I've not finished my US platoon (nearly there!), I couldn't help but do a quick test on the Brits (flying the old flag for blighty!). 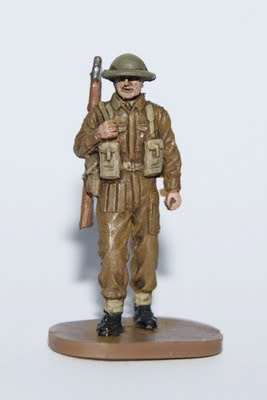 So what are they like? In common with the US Infantry, the detail is nice and sharp and generally clean. There's more flash than the US models, but the plastic is fairly tough so it cleans up pretty easily. The level of detail makes them a joy to paint though. The uniforms and webbing are nicely detailed, although the weapons are less defined (the US infantry have a similar issue), which is odd; it does have one advantage though, as the ratio of stens to rifles is high, but could be remedied with a bit of judicious trimming of magazines!
On the subject of the mix of equipment and weapons, as I mentioned, it's a bit heavy on the stens (12) compared to Lee Enfields (18), and there are 4 flamethrowers, which seems a bit much. But on the plus side there is a nice prone PIAT gunner and a great officer. I would have liked to see a Vickers HMG and more poses with the Bren though.
Size wise they're slightly tall, but fit well with the US models, and aren't so far out from other ranges that I wouldn't consider mixing and matching. Here's a comparison with one of the models from Caesar's US Infantry Set I and the matchbox British Infantry (which are 1:76 to be fair). 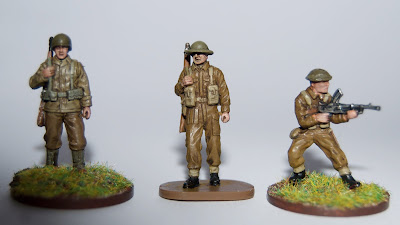