Come back or I'll bite your kneecaps!

Well I think it's about time for a post about Warhammer Fantasy Battle. This was the game that originally got me into wargaming all those years ago (when it was in it's second edition would you believe it?). On Saturday my friend Matt and I had one of our irregular visits to Warhammer World in Nottingham and this time decided to go back to our roots and play WFB, so it was time to dust off the good old men of the Empire!

Matt (The Mott Blog), has written a short set of campaign rules for Warhammer (based on gaining territories and earning revenue from them), that we thought we'd try. First job was to sort out the map, a random affair that led to us both starting out in control of Marshes!

TURN 1 - SPRING
The campaign started in Spring, with us rolling up a pitched battle as the first game, and so it was that 2000pts of the Empire's finest lined up against Matt's infantry heavy High Elf army (the early stages have restrictions on the availability of heroes and special and rare choices). 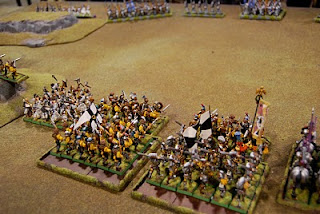 Lined up and ready for action
Well, what can I say? I had one of those games... Knights with paper armour and rubber lances (who couldn't pass leadership tests on a Ld9 either), and Matt's always strike first elves mowing down troops before they could hit back meant I conceded early, giving the first game convincingly to Matt. In particular, he's developed a clever and very tricksy tactic involving small groups of 5 or six swordmasters roaming the battlefield, like mobile landmines! With WS6, 2A and S5, they buzz-sawed through units like they weren't there. 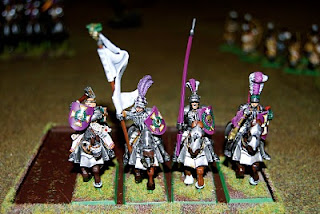 My knights yell their battle cry, "Run away, run away!"

Matt took control of an extra territory, a plain, increasing his earnings considerably as he could now harvest crops.

TURN 2 - SUMMER
Summer saw us roll up a flank attack. Struggling out of their marsh, my Empire army found themselves outflanked by the swifter elves. As defender, and not knowing where a flank attack might come from, I deployed tightly in the centre of my table edge, my flagellants and volleygun protecting the left flank, my knights the right, with my infantry (spearmen and greatswords, each with a detachment of swordsmen and handgunners) in the centre. Matt decided to put his two units of Seaguard into the flanking force, with his archers holding his right flank and his spearmen, swordmasters and bolt-thrower the left. 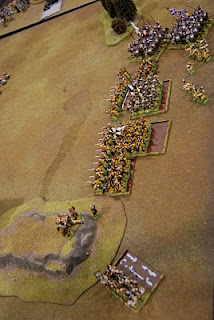 The initial set up

In a brave, but possibly ill-advised early move, Matt moved his eagle up to attack my volleygun. 22 shots later, and after the singed feathers had stopped falling, I counted that flank as temporarily secure...

Unfortunately for Matt, his reserves didn't turn up until the last minute, too late to influence the result of the game. However this also meant that he had two completely unharmed units left on the table, and when combined with one of my units of knights having their usual paper armour problem, I was only able to pull out a draw. 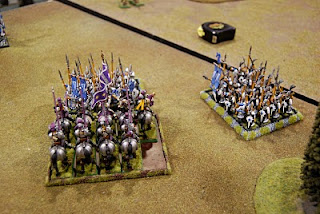 The seaguard turn up too late, and these guys have navigated across the oceans?

Highlight of the game for me though, was the knights who had flames of the Phoenix cast on them, then had my general bravely leave them on their own, with orders to go attack a bolt-thrower head on! A task they achieved without losing a single model from either S5 magic attacks or 6S4 bolts! I could just imagine their reaction to the orders "you want us to go where?!"

TURN 3 - AUTUMN
For our final game before winter shut down all campaigning, we rolled up 'last stand', with the Empire as the attacker. With Matt starting with only 1000 pts to my 2000 it should be easy, but of course he only needed 501 victory points to force a draw, which would still leave me a territory down overall. Better keep my knights away from him then...

In the end I did manage to pull it off, thanks largely to my volleygun, which beat the odds to cause lots of damage with only one misfire (resulting in a temporary jam). I even managed to keep both units of knights intact. It was far from a walkover though, the loss of even one high value unit, with characters and banners, could have been disastrous for me, and Matt could afford to throw away units without concern. The result was a very tactical game, with me trying to keep a running list in my head of how many VPs I'd given away and calculating each move and attack very carefully.

The win gave me a new territory, a plain. As winter set in we were neck and neck on territory, with a plain and marsh each, and both of use with one win, loss and draw under our belts. However Matt's early win had given his treasury an extra boost, putting him closer to being able to buy upgrades.
Posted by Alan M at 17:25