A sky full of Starlings

In a bit of a departure I'm not posting about gaming this time, but one of my other hobbies, birdwatching. The reason is simply that earlier this week I was lucky enough to witness one of the most incredible natural history spectacles to be seen in the UK.

My wife, Melissa, and I had decided to take short break in Cumrbia/Lancashire, so that we could visit the RSPB reserve at Leighton Moss. We'd heard that they sometimes get large numbers of starlings roosting in the evening so decided to stay around for a bit to see if they would come in. Now, the starling is a bird most of us are probably familiar with as a somewhat noisy, and sometimes argumentative garden visitor, but they have another side.

As dusk set in, starlings started to gather from all directions, first a few hundred, then more. Flock after flock came in until there were, quite literally, hundreds of thousands of starlings swirling about in a stunning display of synchronised arobatics, right over our heads. It wasn't just us who had turned up to witness the spectacle either, as peregrines and sparrowhawks also dived in to the writhing mass in hope of a meal. Each time a predator flew in the starlings would change formation to confuse it, at one point even drawing in, and then closing up around the poor, confused bird! 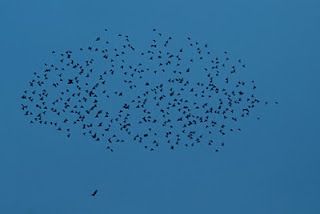 The first starlings turn up,
That's a sparrowhawk circling just beneath them 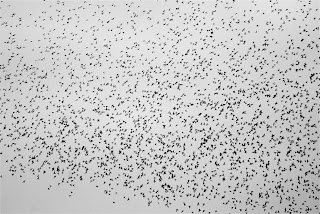 A tiny portion of the final flock, this just doesn't do it justice!

This all carried on for about ten, maybe fifteen minutes, with more and more flocks merging until, at some unheard signal, the entire flock descended into the reedbeds, as if they were being poured down a funnel.

So, next the next time you see some bedraggled, squawky bird squabbling for space on the bird table, look again, and maybe, if you get the chance, go and see what he can do when accompanied by a few thousand friends...
Posted by Alan M at 13:23