Another Age of Empires

Well it's been a while. Real life intruded recently in the form of a major kitchen rebuild and all the associated disruption, squishing my painting area into a tiny area of our spare room, surrounded by temporarily displaced furniture and crockery. Still, I've managed a few projects, so expect a few posts in a row.

First up, continuing the saga of my Empire army for WFB, are you sitting comfortably?

Right then... After a bit of a break form Warhammer while I was at Uni, I got back into it with a friend when I was living in Portsmouth. Initially using my old army and 3rd edition rules, I got repeatedly smacked by his Skaven. It was the decision to add some more spearmen and handgunners, my first trip to a GW in years, and discovery of the plastic sets that then got me back in the habit. Combined with meeting more dedicated gamers when I moved to Derbyshire (and found Warhammer World nearby) of course.

One purchase of the 6th edition rulebook and the Empire army book and I'd started a completely new army...

I'm not one for designing an army list and then collecting to it. I'm always adding models and units I like the look of or fancy painting, so it's more of a work in progress. I'd been sceptical about the landsknechte style that had started to appear just as I was dropping out of the hobby, but before I knew it, it had grown on me and puffy sleeves were everywhere.

Here's how things stand at the moment. Depending how you calculate it, there's something over 6-7,000 points there.

Since I took this photo I've added enough troops to bring my halberdiers, spearmen and greatswords up to units of 30 to get the most out of the 8th edition changes, as well as a mounted battle standard bearer (to match my foot one) 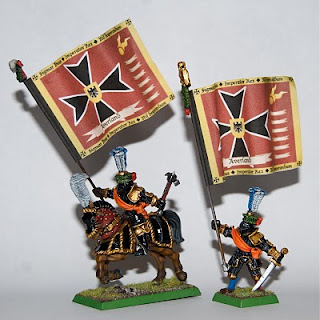 There's also a pile of part and unpainted lead and plastic waiting to be added, including a hero on Griffin (a chance to combine with one of my other hobbies, birdwatching, it's going to be part Osprey, or maybe Red Kite...), unit of free company (which will recycle some of my old models), several units of knights, including some of the metal Reiksgard and Knights Panther, and just a little bit more artillery (mainly because I prefer the older, metal models to the current plastics).

I have to admit though, the more recent releases (plastic flagellants and greatswords) have left me a bit cold. And don't get me started on the awful mechanical horse...

Be nice if they produced some updated knights though.

Of course there's also the Dogs of War army, but I'll leave that for another time...
Posted by Alan M at 15:42