While my painting area was squeezed by building work, large projects were out, but I did find time to catch up on some projects I've been meaning to do for a while.

First up was finishing my Copplestone Castings Neo Sovs. I'd already prepared a few of these, but had quite a few left to go, including most of the command models, and all the basing to do. 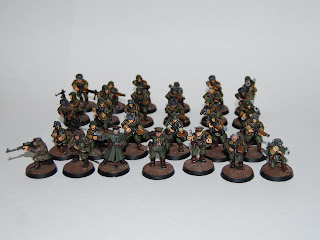 Here's a family photo. Mark Copplestone's figures are a joy to paint, nice chunky models that have simple but effective detailing. There's loads of character to these guys too, with some great expressions. The only problem I had was choosing the right camo scheme. In the end the last few got a different scheme to the first few. I may go back and change the old ones, but for now I'm happy enough, they're not dramatically different from 'table distance' and it just looks like some have had a more recent issue of kit. The front row includes the commanders and two snipers. 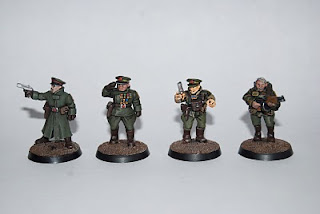 The guy with all the medals is probably only going to turn up on tables occasionally, possibly as an objective! The radioman on the right is a pretty straightforward conversion using a GW Tau backpack and green stuff (for the headset), and is wearing the 'new' camo. The 'political officer' (on the left) was a really quick model to paint, but has really effective (in my opinion).
Posted by Alan M at 16:07