During August (was it that long ago?) Matt and I got a quick game of Warhammer in to try out the new 8th Edition at Warhammer World in Nottingham. Empire vs High Elves at 2000 pts each.

So what did I think? Overall I'm liking the new rules. The emphasis is definitely back on infantry, and I like the balance of the new magic rules. You really need an understanding of how your units will perform in different situations to help decide whether to take advantage of the 'horde' or 'Steadfast' formations. So what were the specific thoughts about how my Empire army was affected?

Infantry: The new steadfast rule really helps Ld 7 infantry, if you can fit in large enough units! The changes to Initiative and second rank attacks really help to narrow the difference between units as well, but without removing all the flavour. Still no solution to the problem of the Empire's signature weapon, the halberd, being bland and unattractive though.

Not sure I'll be taking Flagellants very often though. Now that they will be on the receiving end of more attacks (at least two ranks worth), that T3 and no save makes them look very expensive for troops that will inevitably die in droves as a speed bump (especially now most core infantry can effectively be stubborn).

Cavalry: Knights have taken a bit of a hit. The random charge move has reduced their ability to make sure of getting the charge in, and units sizes mean they don't generally get to benefit from the steadfast or horde rules. They're going to be less of a 'first strike' unit, and more used to throw in a tip the balance at a crucial point. Makes it tactically more interesting.

Pistoliers I'm undecided on. As fast cavalry they're still pretty flexible. Pistols are now longer ranged, but the negative modifiers for moving and firing at long range soon stack up to reduce their shooting effectiveness. 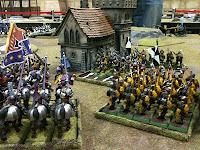 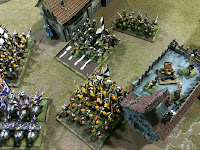 taken with iphone, apologies for quality!
And the High Elves?

I do think GW have got the 'Always Strikes First' rule badly wrong, allowing units to re-roll misses, combined with the change to initiative and extra rank attacking, mean that High Elf units can cause some serious damage (spears attacking in four ranks at WS4, re-rolling misses, you do the math...). It would have made more sense for this rule to simply mean that they acted in initiative order, reducing the number of attacks they would take in return, but not making them cause more casualties. This would seem to sit with the description better.

That said, they're not entirely unbeatable, but its trickier.

High Elf spearmen are quite scary now, attacking in 4 ranks! (and for less points than a Dogs of War pikemen, bit that's another rant...)
Posted by Alan M at 16:34