Back in the old Rogue Trader Days I collected Imperial Guard, a follow on from my first army of pirates and mercenaries. At that time it was mostly bulked out with the first set of plastic guardsmen GW did, but I always wanted to fill it with the original Imperial Army models. Whilst not exactly realistically proportioned, they were models with great character.

Well I now have quite a collection of these models, some from my original army, some recent additions from ebay, and I finally got around to slapping some paint on. I succumbed to nostalgia and went old school with a mid grey uniform which, as well as looking pretty good, was also incredibly quick to paint. There are still some details to be done, like eyes and unit markings, along with the bases, but progress has been good. I'm going to do these minis in batches, a few at a time between other projects, so I don't get that jaded feeling that sometimes comes from doing whole units (and is why I haven't finished those Tau, and myriad other projects!).

And so, on to the obligatory piccies... 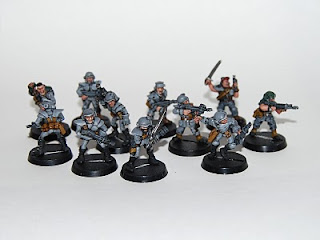 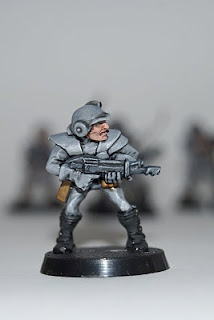