I've managed to paint up some of the US Tank Riders from HAT, they came up pretty nicely I think. 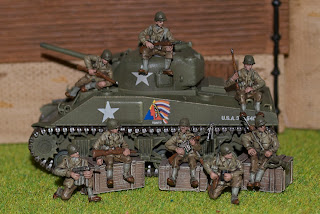 They share pretty much the same strengths and weaknesses as the Brits: the gates for the plastic are all placed on the helmets, which makes removing them tricky, and the plastic is very soft, but the equipment carried by the models is well chosen, the poses look natural and each sprue makes a complete squad (plus tankers).  If anything these are even more nicely equipped than the Brits; a number of  squad members have grenades hanging from their webbing and there's a mix of weapons, with most having Garands, but also some carbines spread amongst the NCOs and those with heavier loads.  I particularly like the inclusion, as well as a trooper with a bazooka, of his second carrying spare rounds; it's this kind of thought that's evident throughout the set.  One of the kneeling figures also comes with a choice of either thompson or grease gun (and the appropriate ammo pouches too), which is a nice touch, even if the sculpting on the separate hands makes him look like sergeant banana fingers! 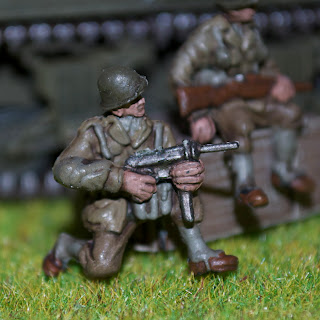 All in all, another good little set and very reasonably priced, at 44 models to a box!  Perfect for filling out half-tracks, trucks and scattering over those Shermans. 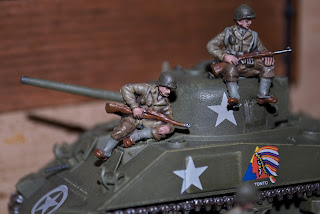 I'm working on the German set now, more on that at a later date.