Wherever I lay my HAT... and an offer

More parcels!  This time some more reinforcements for my WWII Brits, US and Germans.  The plucky Tommies get some tank riders/crew and some heavy support in the form of Mortars and the Venerable Vickers HMG. 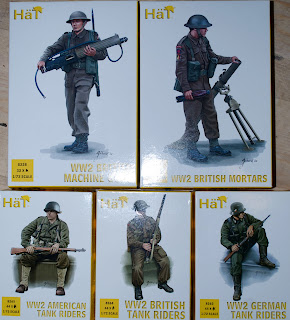 There are also some Armourfast packages on the way; a box each of Cromwells and Sherman Fireflies, and some German Mortars.

I've managed to paint up some of the Brit Tank Riders so far.  My plan is to use the riders to mark vehicles that have passengers (taking them out when not needed).  Each box follows a similar pattern: 4 sprues of 11 poses, usually including two tank crew suitable for hatches and a couple of kneeling poses that could also be mixed with foot troops as officers/NCOs.  The seated models are mostly armed with the standard type small arm for their nationality, plus one support weapon (a Bren, BAR and MG34 for the sets I have).\  Sculpting and detail is good, but the plastic is soft, so I'm a bit worried about peeling paint.  One very annoying feature is that most of the models are attached to the sprue at the head, so separating them without flattening the helmet requires care and some tricky trimming.  These were painted up in the same way as my other brits.  They also look good lazing about, probably waiting for a brew... 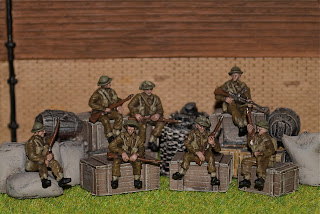 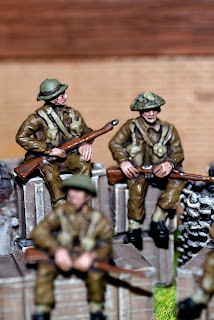 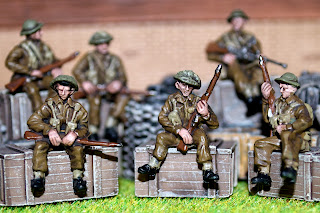 And here they are in those Italeri Half Tracks from a couple of posts ago. 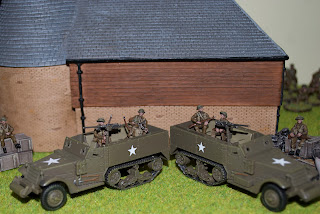 Now, I seem to recall I mentioned an offer in the post title...  When I checked the box of US tank riders, I found that I actually had three sprues of US troops and one of Soviets!  The three correct sprues are more than enough to meet my requirements, so I don't have much to gain by trying to get the box changed at this stage.  Instead, if anyone out there could make good use of 11 assorted Soviet tank riders and crewmen, just leave me a comment below and an email where I can contact you, and they shall be yours!  (first come, first served!!!) 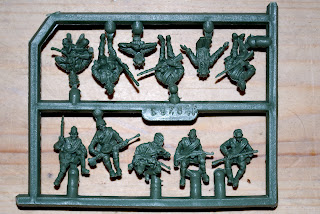