The disastrous ambush had been a massive blow to the Imperial force. Irreplaceable aircraft had been lost but, perhaps more importantly; the Tau had gained a massive propaganda boost. The Imperial command needed to find a way to take back the initiative and show that the Tau could be beaten before morale plummeted and the Commissars took matters into their own hands.

Knowing that the Tau fighters, with their Blacksun filters, could outclass the imperial fighters in the cloudy conditions that looked likely to prevail, the commander knew that something was needed to draw the aliens out into the open where they could be engaged to the Navy’s advantage, a classic Rue de Guerre…

In a misty dawn two Navy Marauder Bombers and four thunderbolts took to the air, their ramjets shattering the silence. Reaching maximum altitude, two of the Thunderbolts matched the bombers movements while the other two flew racetrack escort patterns. To the Tau scanners it would look like four bombers and a pair of escorts, an easy target. 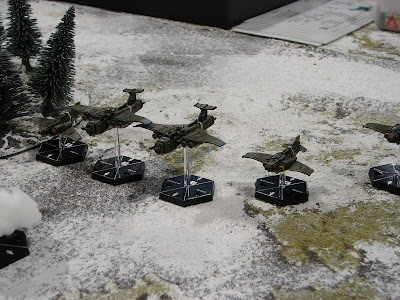 [The imperial flight waits to draw out the Tau - Photo by Matt Otter]
“Red flight, this is Cardinal, doghouse has five bogies inbound on our position, 12 o’clock low, signature suggest Barracuda fighters. Escorts stand by to engage, Hatchet and Broadsword, execute plan alpha on my order.”

Would the Tau take the bait once they realised they faced four escorts? The two genuine bombers had been sent up to sweeten the deal, and as the Tau fighters pulled into a V formation in the cloud layer, it was clear that they thought it worth the gamble. 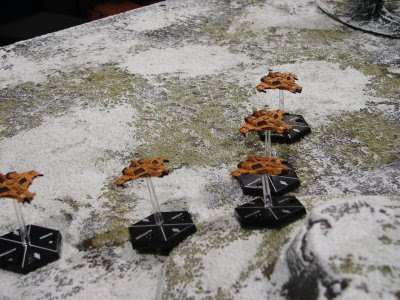 [The Tau formation closes head-on - photo by Matt Otter]
Closing with each other at phenomenal speed, the Imperial Thunderbolts met the Tau fighters as they climbed out of the cloud layer. Skystrike missiles and cannon shells blew one of the Tau aircraft from the sky and damaged two others. Racing past each other, the remaining barracudas executed a near perfect formation half loop to come in behind the Marauders…

At the order from Cardinal, both marauders poured power into their four ramjets and dropped their aircraft into power dives. The rapid drop in altitude left most of the barracudas well above and out of range as they came out of their loops, and facing two Thunderbolts that had pulled wing over’s to protect the bomber’s rear.

In the event, one of the Barracudas did manage to get in position to take a shot, but proved unable to hit the rapidly diving bomber. Unfortunately in trying to line up his shot, the Tau pilot flew straight and level a moment too long and found himself barely having time to eject as the imperial bomber’s rear and dorsal turrets shredded his aircraft end to end. A second barracuda fell to the escorting Thunderbolts.

With three aircraft down, the Tau flight leader gave the order to disengage. However they did not leave without exacting some measure of revenge, downing two of the escorting Thunderbolts, including the flight leader Cardinal, in a final exchange.

As the two forces turned and headed for their respective bases, the Tau nursing damaged aircraft, it was clear that this fight was going to be fierce. The Imperial trap had worked, the Tau could be outmaneuvered and beaten, but the cost had been higher than hoped; with two more Thunderbolts lost the Imperials had already lost half their fighter force. However although Tau losses had been less so far in the campaign, crucially they were running short of their Blacksun equipped aircraft.

As the weather closed in further, blocking all flight operations, flight engineers and Earth Caste technicians stripped down and repaired aircraft; and the respective commanders, human and alien, retired to their bunkers to plan their next moves.
Posted by Alan M at 15:18