In the event, it was the imperial forces that made it planetside first, by a bare week. Lacking the resources to prevent the Tau from landing, the meagre navy escort had to limit itself to harassing their Tau counterparts. Crucially this meant that neither side was able to conduct orbital bombardments of the planet before they had to withdraw to deep space.

The Imperial ground commander used his slight advantage to set up listening and radar posts to forewarn of the inevitable Tau attack . Sure enough, within mere days of the Tau landings, raid warnings came in of 5 Barracuda fighters probing the Imperial defences. 4 Thunderbolts and 2 lightnings scrambled to ambush the unsuspecting Tau in a pincer movement.

With the Tau approaching in the cloud layer, the inexperienced imperial flight leader order the two flights to converge too early, putting them right into the fire arc of the Tau fighters climbing from the cloud. The Tau were quick to capitalise on the mistake, rapidly downing both Lightnings and 3 of the Thunderbolts. Although the remaining Thunderbolt scored some payback by downing two barracudas, it had been a disastrous first engagement for the Imperial Navy (tempered only by the pilots following their bail-out drills perfectly). 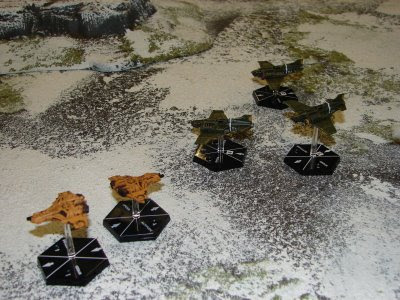 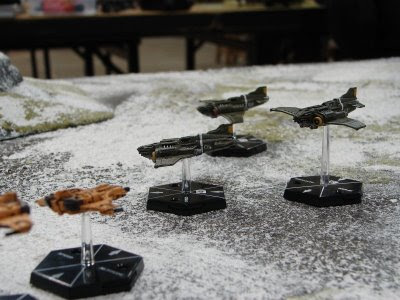 Images by Matthew Otter
Posted by Alan M at 18:01