January 's traditionally the time for looking back and evaluating. So I've waited until February...

I thought I'd take a quick look back over 2010, particularly at progress on painting and gaming, and maybe think about what to tackle this year. Overall, "10", as I cam to know it, was a bit of a diverse year. I started a couple of projects, managed to complete some long standing ones and even found time to enter a couple of the Sheffield Irregulars painting challenges (I even managed to win one with a Tau entry although, admittedly, there were only two other entries...). So, what were the other highlights? 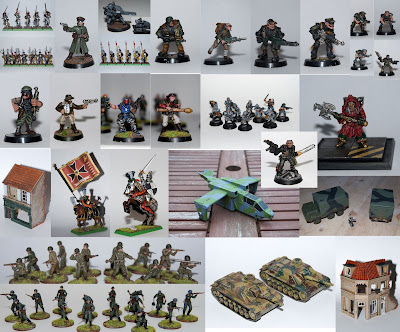 Gaming wise I didn't do that well. Apart from a couple of games at Warhammer World with Matt (who's now gone off travelling the world, how inconsiderate), I didn't get much gaming in.

In all, could have done better. However I have had to contend with busy times at work and a house that, in the latter half of the year, was practically a permanent building site. For some months I couldn't even get near the painting table because of stuff stored around it.

Sadly I haven't managed to make much headway until recently on my proposed Tau Army. To be honest I'm not really feeling the love on this one. I've also been having a bit of a think about just how many part started projects I have, and it's quite alarming! Amongst the front runners are:
This year I need to be more ruthless in getting projects finished. I'm going to keep track of my expenditure on gaming and sell off some stuff I'm almost certainly never going to get around to using. Oh, and try really hard not to start new projects (at least until some of the above list is done).